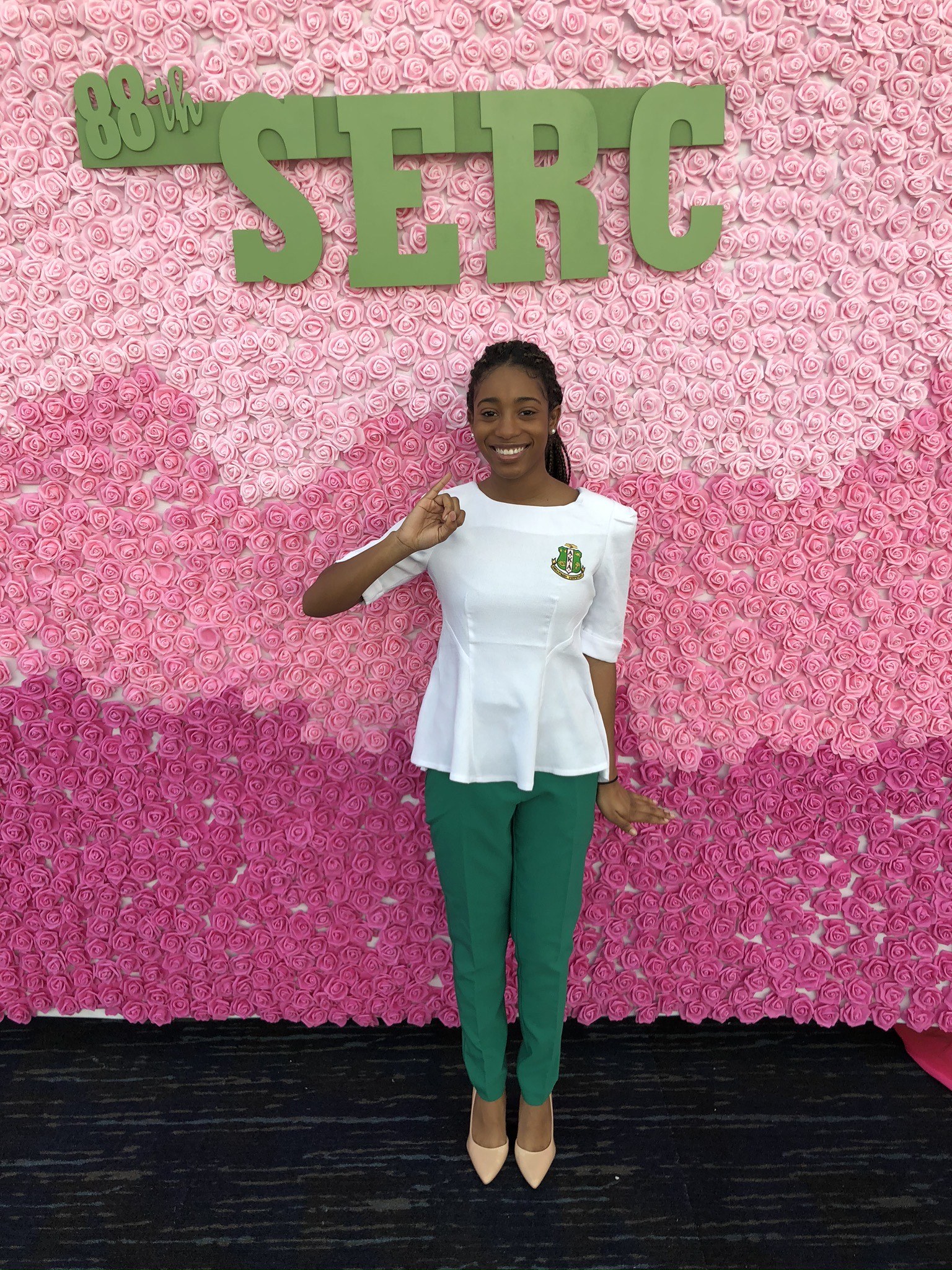 Taylor of Memphis, is a Haslam Scholar studying political science with a concentration in public administration and Africana studies and a minor in public policy analytics. Washington has held leadership roles with Minority Enhancement for the University of Tennessee (ME4UT), the Office of Diversity and Engagement Student Advisory Board, and the Student Alumni Associates. She is also a dedicated member of Alpha Kappa Alpha sorority, serving a previous term as chapter president. Working with Bridges USA and Preserver Partners, she has developed mentorship programs and community workshops, educating middle and high school students on important topics such as sexual violence and financial literacy. She plans to attend law school at Penn State University in the fall.

Washington values community and friendship. “My favorite memory on Rocky Top has been attending all the football games with my friends and the rest of the Volunteer family that comes to campus,” Washington said. “If I had to name one specific game, it would be the 2016 Florida game, when we had that amazing comeback. There is nothing like being in Neyland with thousands of other people cheering for the Vols.” 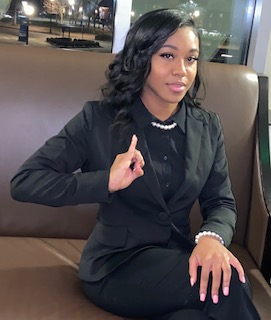 Aligning with the ideals of our sorority, Fall 19’ initiate, Alyssa Patterson has a passion for service. In fact, she has participated in numerous projects on Middle Tennessee State University’s (MTSU) campus. For example, in 2019, she earned eighty-five (85) community service/volunteer hours, worked diligently with partnering organizations to encourage voter registration amongst MTSU students, and promoted the empowerment of students with disabilities in tandem with Borderless Arts. Subsequently, she shared the information she gleaned during her time with Legal Aid to further the purpose of her on-campus legal fraternity Phi Alpha Delta where she fulfills the Volunteer Coordinator role.

What is more, her chapter was so amazed by her “service to all mankind” and commitment to her community; she was selected as Co-Membership Chair unanimously. Finally, the MTSU campus recognized her excellence as she was awarded the prestigious Fraternity and Sorority Life “New Member of the Year” honor. Impressively, this was all accomplished while performing her duties as Assistant Financial Secretary and serving on the Technology, Women’s Healthcare and Wellness, and Sisterly Relations committees. Equally important, she exuded “high scholastic standards” by maintaining a 3.60 cumulative grade point average and earning a place on the “Dean’s List” the four semesters she has attended undergraduate school. 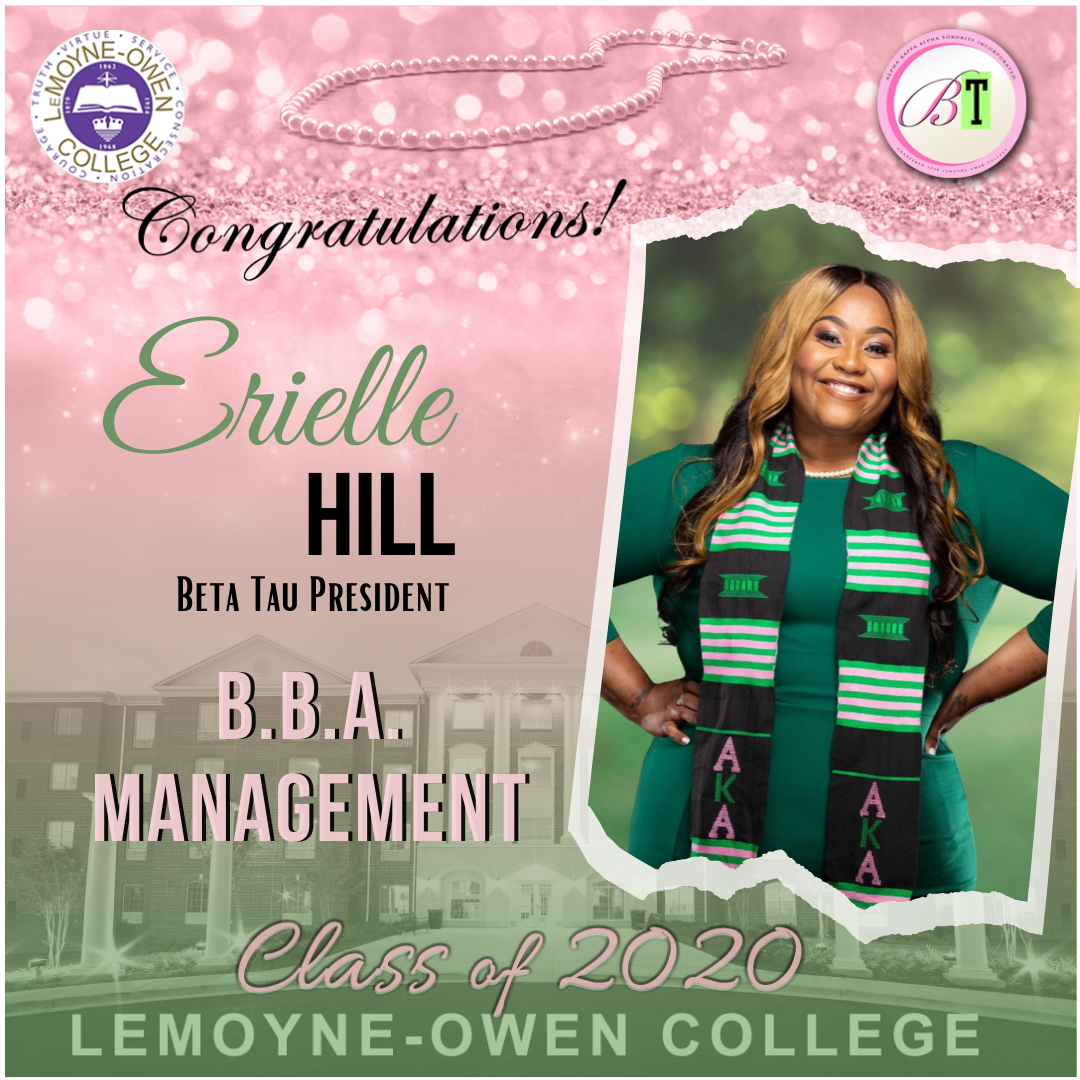 Erielle Hill, President of Beta Tau Chapter Fall 2019 to present, has been busy this entire school year. Erielle completed 21 semester hours and is part of the graduating class at LeMoyne-Owen College. She has managed to achieve a huge milestone in her life, all while being self-employed, volunteering as an intern at St. Jude Children's research hospital, a full-time single-parent mother to 3 minor children, and serving as the chapter president. Erielle always fulfilled her duties as the chapter president, and she has always gone beyond what has been required of her. She not only meets the goal, but she also manages to exceed it. Her motherly way will be missed in the fall by all of the chapter members and graduate advisors and all of those individuals' lives who she has touched.

It is not uncommon for Erielle to offer words of encouragement or lend a shoulder to cry on to someone who is in need. She is no stranger when it comes to "serving all mankind." She has the biggest heart and the gentlest spirit.

In the fall, Erielle plans to pursue her MBA in business and eventually owner of her own beauty bar. 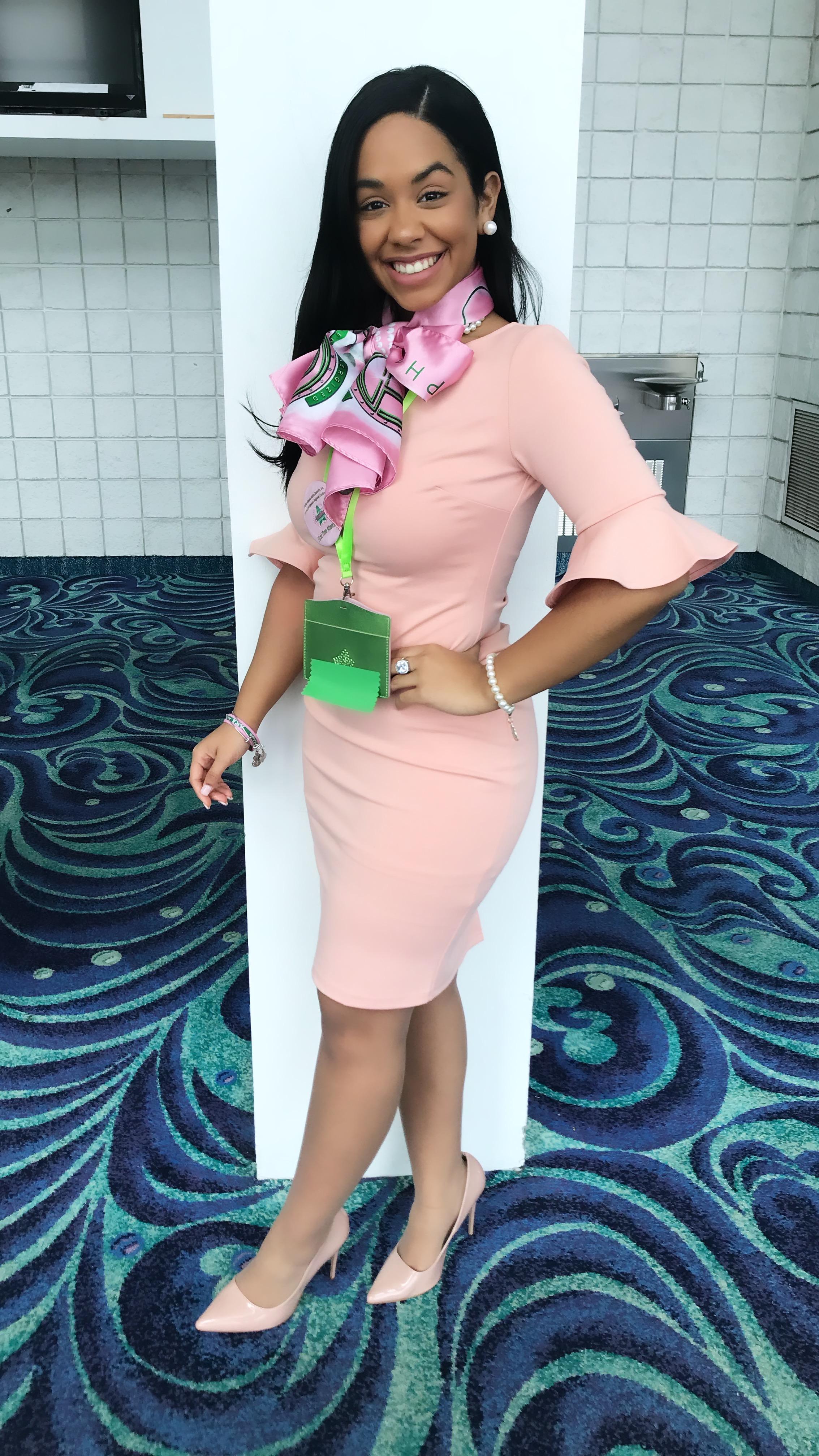 Multi-talented and focused, Cherilynn Mella is an integral part of the Middle Tennessee State University (MTSU) campus community. Since her initiation in Fall 2018, she has remained in a leadership position. For instance, after being elected Vice President, she elevated her chapter’s programming efforts tremendously by working closely with program chairs. As such, she led the charge for Eta Psi members to partner with a wide variety of groups to encourage diversity and inclusion. Inasmuch, her chapter planned/participated in over thirty (30) service projects/events within four months. Importantly, she helped plan the Dr. Martin Luther King Day Observance activity on campus with the Office of Diversity.

In the same manner, once elected President, to encourage academic excellence, she championed mandatory study hours for all chapter members. As a result, the cumulative chapter grade point average (GPA) went from 2.95 to 3.10 in one semester after implementing this practice. Conversely, she developed and presented information to the Accreditation Committee, where her chapter was awarded “True Blue Accreditation,” the highest honor any Greek-letter organization can obtain on campus. This was significant as this was the chapter’s first time receiving this award. For over two years, she has been a News Reporter and Anchor for MTSU’s student-run news station MT-10.

Moreover, she executed over one (100) hundred hours of community service on campus and the surrounding communities. Remarkably, she did all this while maintaining a 3.50 GPA. Unsurprisingly, she was selected as MTSU’s Fraternity and Sorority Life “Chapter President of the Year”. 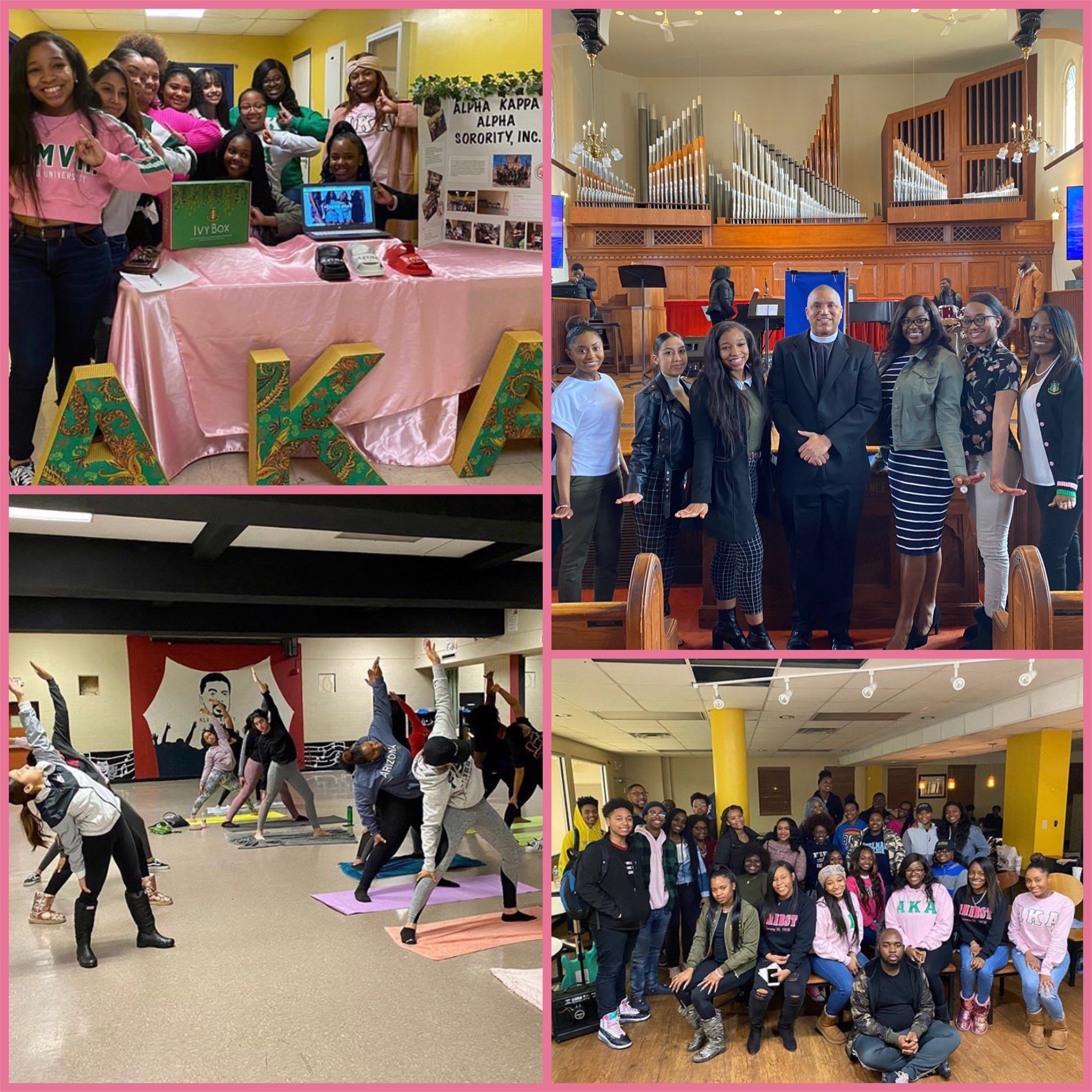 The Ladies of Fine Pi Chapter at Fisk University would like to spotlight our Spring 2020 Skee-Week. Themed, "Pretty Girl Semester," provided programming that both chapter members and the campus community thoroughly enjoyed. Pi Chapter began the week by fellowshipping at Fisk University's Memorial Chapel during "Pretty Girl Praise". The following day hosted a "Pretty Successful", an entrepreneurship fair showcasing our very own Pi Chapter business owners. They partnered with a campus organization Go Poetry on "Pretty Poetic", a Black History Month Poetry Slam where students were able to display their poetic abilities and share any other unique and artistic talents. Our "Pretty Girls Love Yoga" session promoted women's health and stimulated everyone's mind, body, and soul while being lead by a black female HBCU graduate and entrepreneur.

Pi Chapter hosted "Pretty Smart," a campus tour and event for a group of high school students. They supplied them with a list of late deadline scholarships to promote HBCU attendance and decrease the economic burden of obtaining a college degree. Throughout the week, we spoke to the importance of service, which culminated in "Pretty Serious", a volunteer opportunity with community partner Soles4Souls where we donated and sorted shoes. We ended our Spring 2020 Skee-Week with "Pretty Prestigious" where chapter members and campus NPHC members virtually expressed their love for our beloved HBCU, Fisk University. The Perpetual Pearls of Pi Chapter loved the opportunity to level up and exemplify excellence through sustainable service! 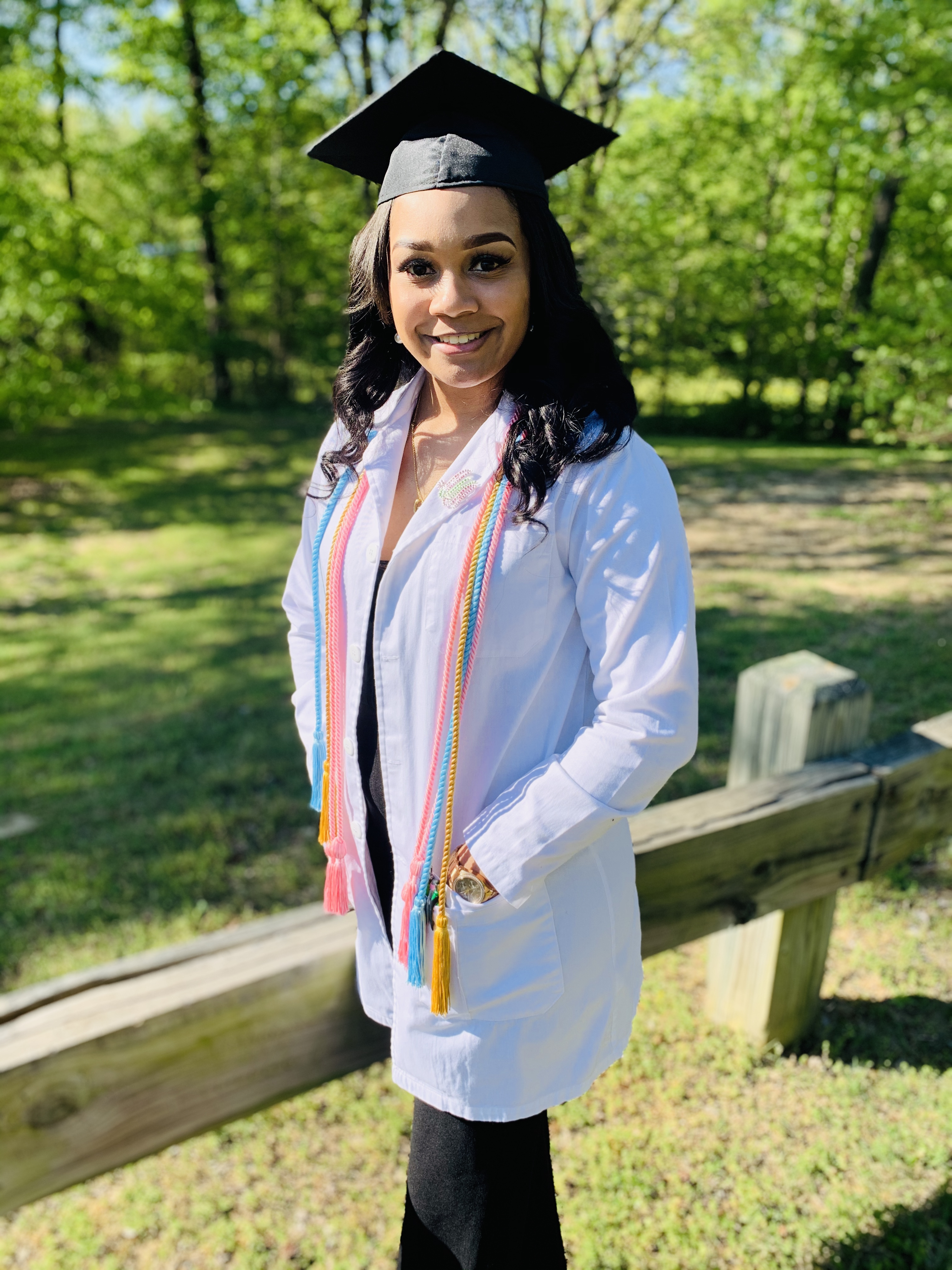 Savannah Scruggs is a graduating senior at Lemoyne-Owen College. She always aspired to be able to become an asset in Engineering. She believed that becoming a Biochemist would give her the ability not just to help configure and solve problems in the science world, but also broaden my spectrum of the career field. Science and math have always been a huge part of her life, that her mother was a math professor and her father being a Mechanical Engineer.

The knowledge that she has gained from her experience under Dr. Davenport at the University of Tennessee Health Science Center has been very enlightening. She worked with various doctors and researchers in retrospect of African American women breast cancer at this research internship opportunity.

At the University of Tennessee Health Science Center, Athena Davenport worked in the Department of Genetics, Genomics, and Informatics. The research that she acquired was recently completed in Summer 2019. She learned the details of all the equipment used for our protocol of testing the African American women breast cancer samples. In these samples, they tested for the measurement of adipokines and inflammatory cytokines in African American Women with and without Breast Cancer Using a Multiplex Immunoassay. Having viewed this equipment in her summer research, inspired her to learn how to create the synopsis of the chemical aspects of machinery.

Entering the graduate program for Biochemistry at Washington University will help her become one step closer to accomplishing her educational goals. Acquiring her Doctorate’s degree will allow her to pursue her ultimate goal of becoming an official biochemist at a national laboratory company. Her ultimate goal may come in increments, but patience, hard work, and the professors at the Washington University will help her even further to my career path. 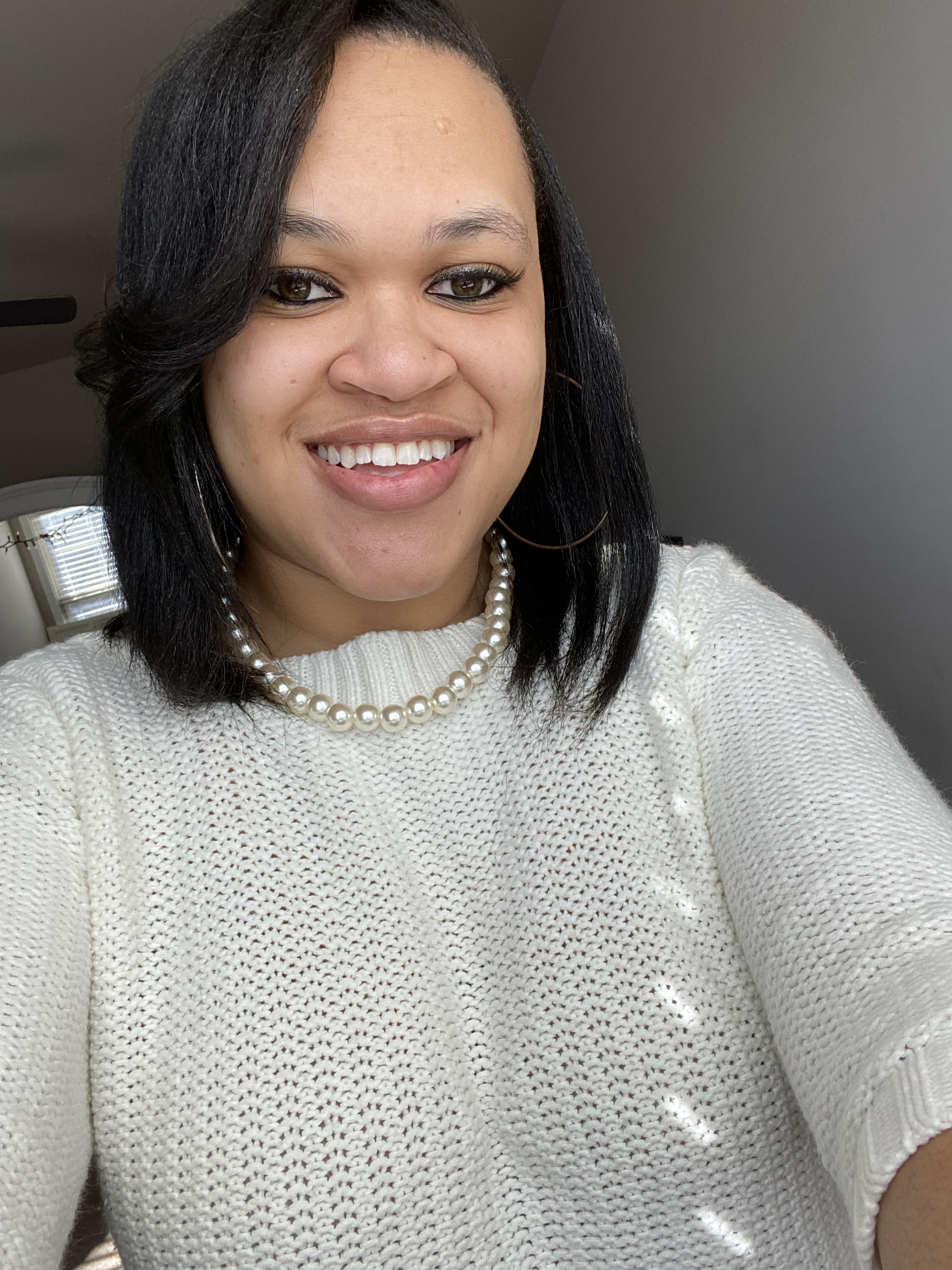 Innovative and artistic only skim the surface when describing Ingesa “Gabby” Spencer. As Technology and Social Media Chair, her creative and imaginative designs propelled her chapter to the forefront. For instance, their social media followers increased considerably when she took the reins. Additionally, the region also noticed several of her original creations on the region’s social media accounts. It is because of her undeniable talents that she has been invited to participate on several social media development committees. To continue, she also has a love of sports, and when she saw there was no organization that blended her two passions, she helped bring one to her campus. Gabby became the first Vice President and a Charter Member of The National Sports Media Association. Simultaneously, as Student Sports Information Director, she managed her University’s official athletics social media accounts and website. In the same manner, she also oversaw three (3) social media accounts for the University’s Housing Department.

To further perpetuate her community involvement, she served underrepresented and disadvantaged students as a chaperone and mentor with the University’s Scholars Program. In the same way, she also helped develop and plan intramural activities for Greek students from all councils on campus to foster unity and inclusiveness. While managing all the facets of other campus responsibilities, she also effortlessly served as Historian and Marketing Committee Chair. Nevertheless, her commitment to academics never failed as she maintained at least a 3.0-grade point average.