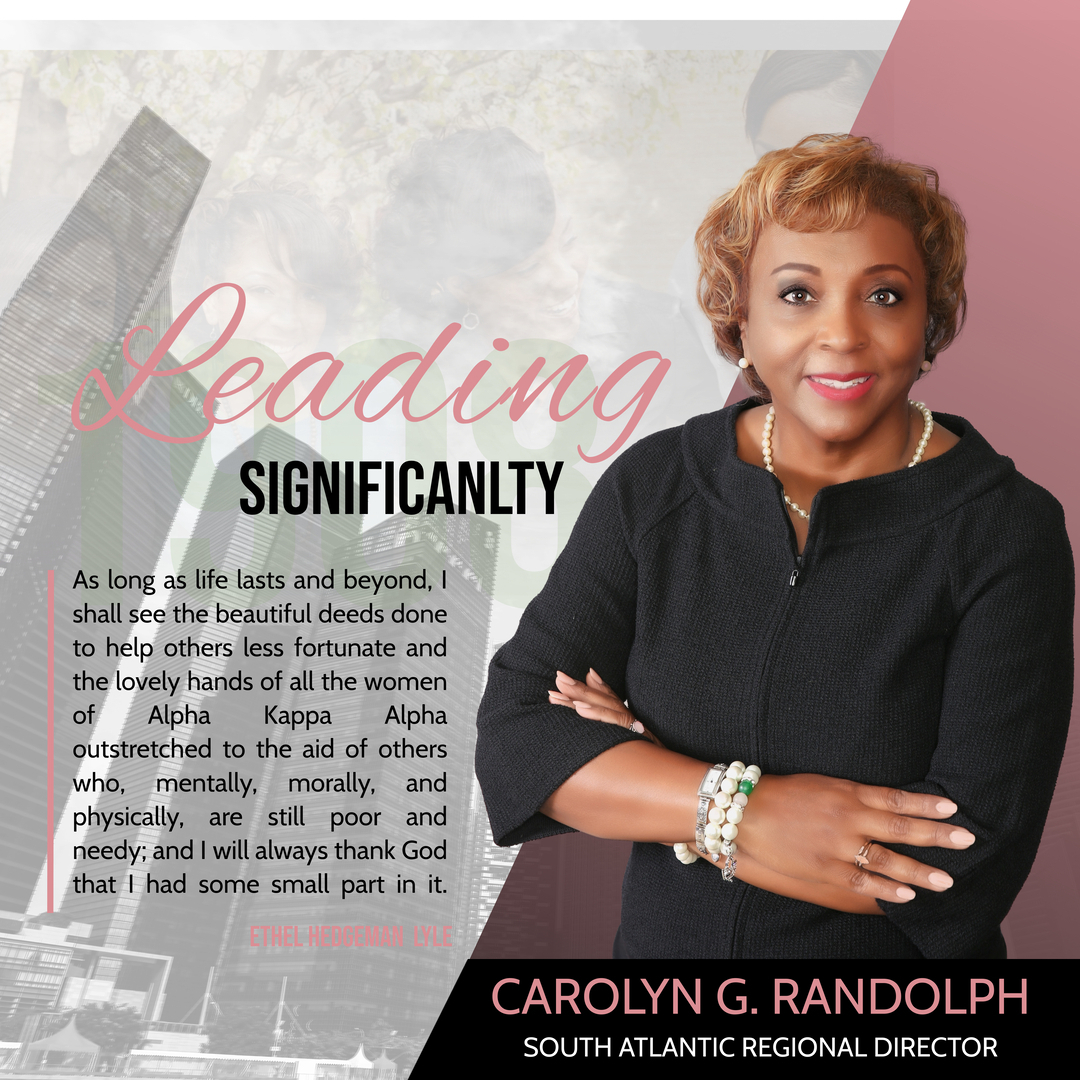 Mrs. Carolyn Gause Randolph is now serving her second two-year term as the South Atlantic Regional Director of Alpha Kappa Alpha Sorority, Incorporated (AKA). Initiated in the Alpha Psi Omega Chapter in Wilmington, North Carolina, Mrs. Randolph has been active in our illustrious sorority for more than 36 years. Currently, she is a member of the Gamma Tau Omega Chapter in Columbus, Georgia, and is recognized as both a Life Member and a Silver Star. Throughout her years of service in the sorority, Mrs. Randolph has held a number of positions on the local, regional, and international levels.

With $20,000 in contributions, Mrs. Randolph endowed her “Be the Best You” Educational Advancement Foundation (EAF) scholarship just 17 days after being installed for her first term as Regional Director. Under her leadership, the SAR’s membership has surpassed 18,900 members. Also, the SAR has received the Constance K. Holland Overall Achievement Award for its leading contributions to the EAF and has raised the most funds on HBCU Community Impact Day for two years in a row. Most recently, the region awarded more than $15,000 to 21 students through the Georgia-state-sponsored Carolyn G. Randolph Financial Scholarship program, using funds generated through sales of Georgia AKA specialty car tags. Additionally, during the global pandemic, the region made AKA “herstory” by hosting the sorority’s first-ever virtual regional conference in October 2020, and a virtual EAF Institute on November 15, 2020.

On the international level, she is the Directorate Liaison to the International Connection Committee and chairman of the Chartering Revision Committee. Previously, she served as a member of the Reinstatement Task Force Committee; Boule Philacter Committee member for four years; and chairman of the International Nominating Committee under the leadership of Supreme Basilei Carolyn House Stewart and Dorothy Buckhanan Wilson. An educator by profession, she is a phenomenal presenter who has taught workshops in eight of our ten regions and at two Boules and Leadership Seminars. Furthermore, she has been assigned the workshop facilitator role at both regional and international conferences. She can often be heard speaking at programs for Founders’ Day, membership intake, and milestone membership celebrations.

Mrs. Randolph is actively involved in the Columbus community, to include the ministries of the Fourth Street Missionary Baptist Church. Her ministry involvement at Fourth Street includes co-teaching the Christian Family Church School class with her husband, Chester; chairman of the Women’s Ministry; a member in the Deacons’ Wives, Christian Education, and Pastoral Relations ministries. As a woman of strong faith, she inspires audiences when she speaks at churches for Women’s Day and other occasions.

Her civic engagement includes being recognized twice by the Courier-Eco Latino newspaper in Columbus. She was first selected as an inaugural recipient of the “Who’s Who Award for African Americans and Hispanics.” She then received the newspaper’s highest honor – the Publisher’s Award for Community Service – in July 2019. Mrs. Randolph is proud of receiving the 2018 Georgia Legislative Women’s Caucus Servant Leadership Award which was presented to her by Georgia State Representative Carolyn Hugley (District 136).

She and her husband, Chester, have three adult daughters – one who is a member – and three precious grandchildren.