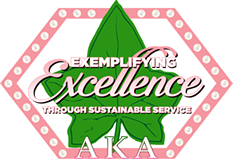 (Hartford, CT – February 28, 2020) – Members of Alpha Kappa Alpha Sorority, Incorporated's North Atlantic Region will honor several leaders and visionaries who have made an impact in the community during its public meeting on Thursday, March 5, at 7 p.m. in the Connecticut Convention Center. The meeting kicks off the Sorority's 89th North Atlantic Regional Conference and showcases the organization’s program goals and initiatives. Community leaders from several areas including corporate executives, educators and the non-profit sector will be recognized for their contributions and dedication to make their communities a better place to live for everyone.

Abdul-Rahmaan I. Muhammad, CEO of My People Clinical Services & My People Community Services

Mary Bentley Lamar, Regional Director of the North Atlantic Region is looking forward to celebrating with all the honorees and attendees at this signature event for the organization. “I am excited to welcome all to our annual public meeting during the 89th North Atlantic Regional Conference,” said LaMar. “Each year we seek to recognize and honor the best and the brightest in the community where we meet—those who are truly making an impact in a meaningful way. I am proud of the honorees we’ve selected this year for their commitment to the greater Hartford community,” she added.