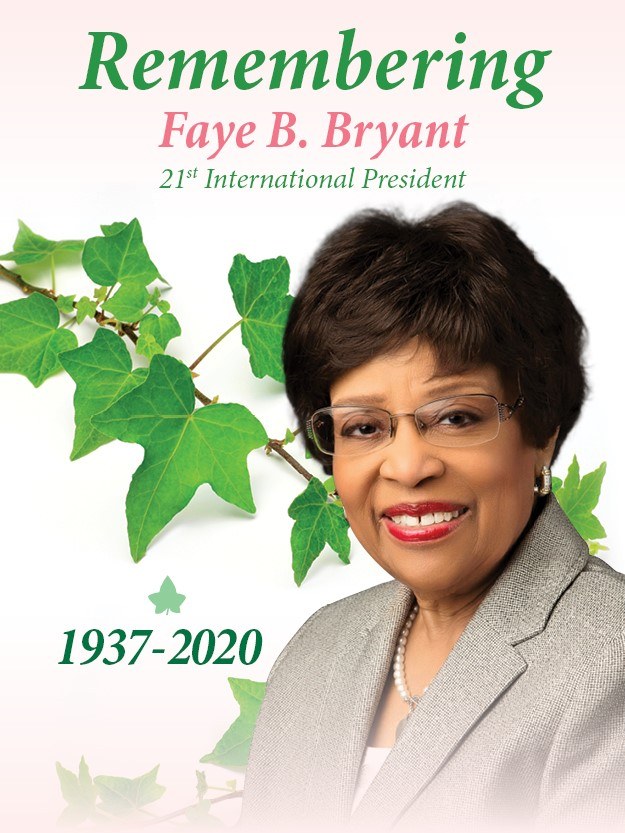 
Alpha Kappa Alpha Sorority, Incorporated® is deeply saddened to announce the passing of our 21st International President Faye Beverly Bryant. She served as the sorority’s president from 1982-1986.

Faye Bryant was initiated into the Alpha Chapter at Howard University in 1955, where she earned her bachelor’s degree. She went on to receive a master’s degree from The University of Houston in guidance and counseling. It was there that she played a pivotal role in establishing the Epsilon Lambda Chapter on the campus in 1969.

Revered as a staunch advocate of education and a pioneer in the profession, Faye Bryant became the first African American female Deputy Superintendent for School Administration in the Houston Independent School District in 1998. She began her career as a teacher in the Houston Independent School District, and would later become a high school counselor, Director of Magnet Schools, and Deputy Superintendent of Human Resources. Faye Bryant also served as the District's Interim Superintendent. After an illustrious career as an educator and administrator, she retired in 2002 as Deputy Executive Director after 42 years of service.

Education and Women’s Rights were at the forefront of her term as International President of Alpha Kappa Alpha Sorority. Some of President Bryant's notable accomplishments include:

Within the sorority, Faye Bryant served as International First Vice-President, South Central Regional Director, Chapter President and many other leadership positions. She was an active member of the Alpha Kappa Omega Chapter in Houston since 1957.

The Faye B. Bryant Excellence Scholarship Award was established in her honor. The award is a capitalized endowment through the AKA Educational Advancement Foundation, Incorporated.

“Our sister, Faye Bryant personified excellence in every aspect of her life. Her devotion to the sorority and the community was unparalleled. We shall forever be guided by her wisdom, intellect and her true sense of civic obligation, “ said Dr. Glenda Glover, International President of Alpha Kappa Alpha Sorority, Incorporated.®

We ask that you pray for Ms. Bryant’s immediate family during this time of bereavement. And, we pray for Alpha Kappa Alpha as we mourn the loss of this great leader, Faye Beverly Bryant.